I was still Lauren Tharp (Maiden Name) when I wrote these... 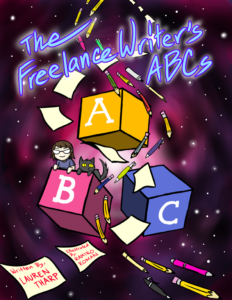 Within the 99 pages of The Freelance Writer’s ABCs, you’ll find 26 timeless lessons for freelance writers.

There’s practical advice like how to blog, the importance of contracts, how to meet deadlines, and how to write a killer query letter.

Personal advice like how to conquer your fear of failure, why freelance writers deserve respect, how to say “no” to a potential client while still saying “yes” to success, and why you should never burn bridges. 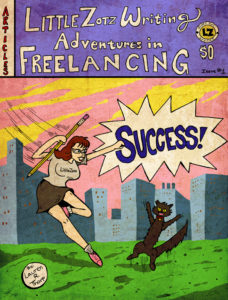 Inside LittleZotz Writing Adventures in Freelancing you’ll find 25+ articles divided into the topics most relevant for budding freelancers:

Fair warning: This was the first free eBook I ever published and so some of the links are sorely outdated. It was also created before I hired a professional illustrator, so you'll be subjected to my oddly-proportioned drawings. Most of the written advice is still relevant though, and — hey! — it's FREE!

The Writernomicon is a list of 50+ publications that pay writers $50 USD or more for writing blog posts as guest writers.

Well, clearly, it’s based on the classic Necronomicon by H.P. Lovecraft. Even the cover design – by Ramiro Roman – harkens back to potential designs for that fictional tome. And that makes me laugh. And things that make me laugh are awesome, and; therefore, worthy of publication.

However, the “nomicon” suffix that Lovecraft used, once translated as “Book of Names,” seemed fitting for this book as well – since it’s essentially a list of publishers’ names. A book of names…for writers. Writernomicon.

The way you use this “mystical” e-book is entirely up to you. Personally, I like to look up a publisher that seems interesting and then pitch them an article idea. But you could also think of an article idea first and then look up which publisher seems like a good home for it. Up to you! 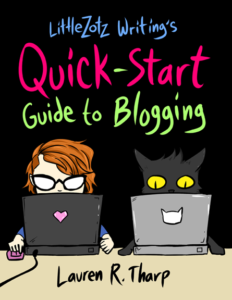 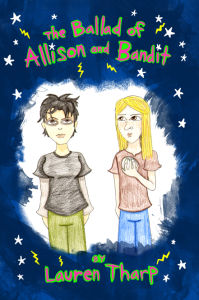 Summer vacation. 1999. Fourteen-year-old Bandit finds herself alone and suffering in silence after a death in her family. Unable to cope with her grief — and forced to grow up quickly by neglectful parents — Bandit is in desperate need of a friend: Even if that friend is the neighborhood outcast, Allison Gale… a large-nosed girl with no sense of smell and a penchant for eating raw onions.

The Ballad of Allison and Bandit tackles grief, growing up, and gaining a purpose. It’s a darkly humorous drama about abandonment, isolation, mortality, friendship, and hope.

Buy the Paperback On Amazon...

...or in France, Germany, Italy, or Spain! (Note: The book is an English language book regardless of country of purchase).

You can also request that your local book store carry the paperback by providing them with either of these ISBN (barcode) numbers:

"The disappointment and disdain is tangible in The Ballad of Allison and Bandit. So utterly aware of her hard-done-by-ness and resigned to being a 'worker drone,' Bandit seems pretty set on her sad path to an average life. Yet from the outset, her observations of the world around her speak of an inquisitiveness that begs you to turn the pages and see what trouble she might find. And most of all whether things will turn out for her.

Poised to go off the rails in a very big way, with parental and financial burdens forcing a premature coming of age, Bandit finds an unlikely friend. The twosome is intriguing and eventually adorable.

With touching moments and gentle humour, Tharp juxtaposes the mundane with the uplifting, and adds a dash of tragedy.  Written with knowing and a whole lot of heart." ~ Kris Emery, NZ.

"'I needed a friend who would never understand.' That statement was one of the many things I will carry with me long after reading this book. I found the novel to be not only pleasurable to read (I devoured it) but also thought-provoking and meaningful. Without giving too much away, this book deals with a friendship formed over the course of a summer and how it affects one of the girls (Bandit) and the direction her life is taking. We get to intimately know Bandit and her world throughout the book and I have seldom encountered an author so thoroughly capable of pulling me in. The vivid imagery made me see what they saw and walk where they walked, and the rich characterization made me remember the fiery ache of a soul on the cusp of adulthood.

I urge you to extend your hand to Tharp, as Bandit did to Allison, and let them lead you to a world at once new and intimately familiar." ~ Heather Landry, IN.

"The Ballad of Allison and Bandit is a story of a teenage girl who suffers from grief from a death of a family member. Bandit needed a friend, and she found it on Allison, the school outcast.

I actually felt the grief of Bandit and was glad when she met Allison. I feel like, if Allison didn't come into her life on the right time, Bandit might have suffered from depression. And I think that's the moral of the story, that behind every human grief there is a true friend out there who will make us realize that life is still worth living. This is more than just a book about friendship, but also about family, hope, second chances and yeah, humor." ~ Joy Collado, Philippines.

That's right! You can read my book RIGHT NOW for absolutely FREE by downloading the PDF! 😀

There are so many blogs, so many different guidelines, and so much conflicting advice about how to get your guest posts or freelance blogging submissions accepted. It’s hard to know what you should or shouldn’t do in each case.

No problem! That’s why Sophie Lizard and I wrote this book for YOU.

"This book can act as your golden ticket to a lifetime of success and renown. Sophie knows the world of guest posting (for money, for exposure, and for access) as well as anyone I know. And what’s more, she’s a great teacher who cares deeply about anyone who turns to her for service… You’re in very good hands.”
~ Danny Iny, founder & CEO at Mirasee

This book is an excellent guide for anybody who wants to start making money from writing blog posts. Lauren and Sophie are the exact kind of people that you are going to pitch and in this guide, they gave me a lot of valuable insider information on how to get noticed and accepted. Unlike some other guides, this one is not smoke and mirrors, but a valuable and entertaining perspective on how to pitch properly and increase the number of editors that will say YES. Really great value for money.”
~ Nenad Pejak