Last week, I found out that the hosting service I had been using was going out of business. This required me to switch my sites — LittleZotz.com and LaurenTharp.net — over to a new host.

That shouldn’t have been a problem. But it was.

Both of my sites were down for several days. And then, when they came back, they were a mess.

LaurenTharp.net, my personal site, was completely wrecked. Tabula rasa. I have to start over. I’m deeply saddened because I had recorded a lot of important life events on that site — from coming clean about my mental health issues, to sharing how I stopped self-mutilating, to sharing the pure joy of spending time with friends, family, and classrooms full of young writers-to-be. But I’m trying to remain optimistic that the new LaurenTharp.net will be better than ever.

LittleZotz Writing — this site! — was sort of salvaged.

I had been making back-ups, but I guess I didn’t do it right because out of over 200 blog posts, only 70 of them survived. And, of those 70, only five were finished drafts. Eep.

My writing samples are gone, my FAQ page is gone, my Video Answers are gone… Nearly all of my pages: Gone. (If you click on the tabs in the navigation bar, you’ll be led to blank pages).

So here’s what’s going to happen: 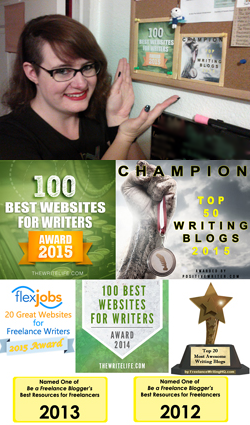 LittleZotz Writing is a multiple award-winning blog and I will not let it die.

Over the coming weeks, I’m going to do what I can to make LittleZotz Writing just as good — if not better — than it was before.

This is going to take time. (But hopefully not too much time!).

There are a few things that need to happen:

It’s going to be difficult to do all that and work for clients; however, I have faith that I can get it done by the start of 2016. Please, be patient, and understand that my site is going to look strange in the coming weeks as I reorganize.

New blog posts will continue to go up on schedule even as old posts are being salvaged. There will be no halt to the regular update schedule.

And, if you loved the posts I wrote this year, and want to show continued support for LittleZotz Writing, I would appreciate it if you nominated LittleZotz.com as one of your favorite blogs for writers over on The Write Life: http://thewritelife.com/favorite-writing-websites-2016/ (And you don’t have to just vote for me — you can nominate as many blogs as you like with a single comment!).

And starting January 7, 2016, I’m going to be hosting a podcast on LittleZotz Writing in addition to writing blog posts. You can listen to the theme song — by the wonderfully talented SIKORA — here: https://littlezotz.com/2015/12/lzp-episode-0/

Thanks for being patient in the meantime.

These pages are working again:

These pages are new:

These pages are gone and (probably) not coming back:

That’s the question I’ve been getting most often! And here’s the dealio:

Everything pre-2013 is gone. You can see some of the super old (2010-2012) posts in LittleZotz Writing: Adventures in Freelancing. But the rest aren’t coming back.

Posts that were written from 2013-2015 are slowly being uploaded. I’ve been making it a point to upload a few of the “classic” posts each week. It’s going to take a while though because there are a lot of posts and all of them need to be reformatted and have their illustrations inserted.

Brand new posts are going up on schedule. Every other Wednesday, there’s a brand new LZW blog post. So keep coming back for fresh content as well as old favorites! 🙂

That’s all for now!

8 thoughts on “LittleZotz Writing is (Mostly) Back!”