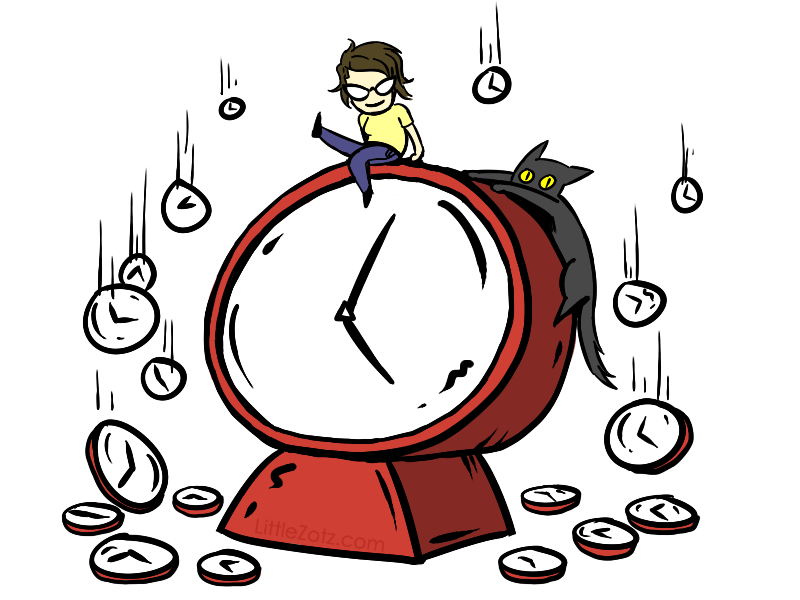 As a freelancer, it’s up to you to manage your own productivity levels. Time to get good!

You don many hats when you become a freelancer. But the biggest, most important, hat is your “boss” hat.

Although you’re technically working for yourself, you still have to produce good work or you won’t get paid. That means keeping on top of your productivity levels.

Here are five of my favorite techniques to increase productivity. They’ve helped me over the years, and I hope they help you as well.

1. Put Yourself on the Clock

Whether you choose to work in the daytime or at night doesn’t really matter. What matters is that you have a steady work schedule set up for yourself.

Even though freelance writing (or freelance illustration or freelance web design or whatever it is you do) isn’t a “traditional” job, it’s of extreme importance to have personal discipline.

Personally, I like to set up a work schedule for myself. I work from around 7:00pm until 3:00am five days per week. The days vary depending on what other adventures I’m having that particular week, but I always make sure to clock in for work.

But sometimes simply having a schedule isn’t enough. Sometimes, during particularly grueling projects, it’s good to literally put yourself “on the clock.” (And I mean that in the clocking-into-work sense, not sitting on your alarm clock!).

Try getting yourself a time-tracker app.

I like to use Toggl. It’s basically a stopwatch, but there’s something about it that makes me “feel” like I have to be productive.

I set a task, start the clock running, and I keep working on that task — and nothing else — until it’s finished. If I get tempted to procrastinate/stray from my task, I know that I’ll have to face the shame of turning off the clock. And I friggin’ hate doing that. It makes me feel like a failure. Whereas, if I keep going, I feel like a boss (in more ways than one).

In addition to time-trackers giving you a motivational boost to keep going, even when you don’t particularly feel like it, they can also help you gauge how long certain tasks take — giving you an inside scoop on how to better price similar services in the future.

Social media can be a huge time suck. And it can even be extremely stressful, if you’re not prone to socializing on a massive level. Or if you’re easily overwhelmed by the idea of scrolling through everyone else’s updates — and how many of those are there each day? Hundreds? Thousands? My palms are sweating just thinking about it!

That’s why I recommend scheduling your social media updates in advance.

I use Hootsuite. It’s free!

I log into Hootsuite once, sometimes twice, a week and schedule all of my social media updates for that week. It takes me about an hour — and then my social media “work” is done for the week. No more time suck.

By using this “set it and forget it” method, I can get myself “out there” and interact with others (mainly by tagging them in posts related to them!) without letting it control my life. I know only log into my accounts if/when someone interacts with me directly.

I’ve written about organization before, but I don’t think I’ve ever properly stressed how effective staying organized — both in the real world and the digital one — is for productivity.

Basically, by staying organized, you waste a lot less time trying to look for things you need.

Really. It’s that stupidly simple. Rather than letting your workspace get out of control to the point where you can’t find anything when you actually need it: Make the effort to keep it tidy. Decide where something belongs and then put it there. And return it to that spot whenever you’re not actively using it.

Whether it’s your literal desk top or your computer desktop, keep it sorted.

It sounds ridiculous, but freelancers often get so involved in their work that they don’t want to stop — not even to take care of the basics.

Unfortunately, eating, sleeping, and basic hygiene are an important part of staying alive.

And you need to stay alive to keep working!

5. Take Breaks and Days Off

Okay, check out this quote I gave in this interview for Time Management Chef — it pretty much says it all:

“What’s my best productivity tip? This might sound like I’m dishing out advice on Opposite Day, but I’ve honestly found that the best thing I’ve ever done for my productivity is taking days off. Each week, I try to take at least one full day off. And it’s done wonders for my productivity, and my health in general.

As a freelancer, it can be all too easy to fall into a pattern of non-stop work. After all, when we don’t work, we don’t get paid – so why wouldn’t we work as much as possible? And, believe me, I’ve been there! I’ve gone up to three months without a single day off several times. And, in 2013, I went the full year without socializing with anyone offline!

For a while, it’s pretty awesome. You feel productive and like you’re really making strides forward in your career. But, you will get burned out. It took me a long time to reach that point, but, when I did, I realized that not only was I feeling terrible (mentally and physically), the quality of my work had also taken a hit.

Starting in September 2014, I made it a mandatory part of my workweek to take a day off. And you know what? I’m more productive than ever! I get more done for more money with less actual work and way less stress. And if that’s not living the freelance dream, I don’t know what is!”

In short: Burnout is the bane of the freelancer — do everything you possibly can to prevent it.

By taking breaks, you’ll actually be more productive. Trust me on this. It’s something I believe in so strongly that I stated it publicly in an interview (see above!).

Take care of yourself. That’s my best productivity tip by far, but also the hardest to accomplish. It takes practice. It took me years to get “right” and I still have to actively remind myself to do so. I have to schedule in days off, or I don’t take them.

Do what you have to do. I believe in you.

Good luck out there!

Oh, and if you have a productivity tip you’d like to share with the world, feel free to leave it in the comments’ section!