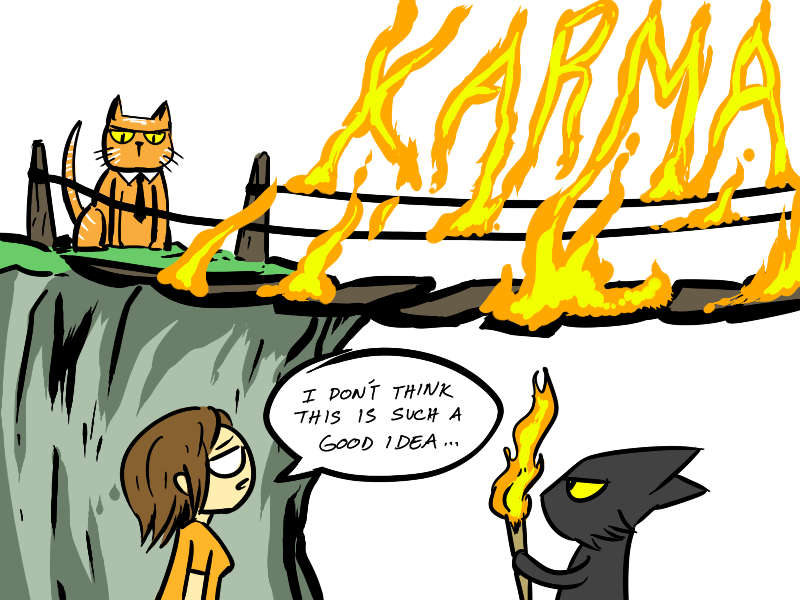 I know that Karma is actually very complex, but for the sake of this article, I’m going to boil it down to something simpler: What goes around, comes around.

Come on. Give me a break. Do you know how hard it was to come up with a theme for the letter “K?”

When I was first getting started as a freelancer, I reached out to someone on LinkedIn I wanted to connect with–someone I’d known for a while, in fact. She made it quite clear that I was beneath her and not worthy of adding as a connection.

Or, in her words, “I only want to connect with people who have made something of themselves.”

A year later she reached out to me to connect (well, well, well…). I guess I’d finally “established” myself in her eyes. And while I did end up accepting her request in the end, she’d already cemented herself in my mind as–ahem–a bit of a b-word.

There are only a few reasons to not make connections with people:

People who don’t seem like much now, may be in a position of power later. That lowly guest contributor may end up being your dream magazine’s next head editor. Or they may end up referring your next big client to you! You never know.

You don’t have to become best friends with every person who crosses your path, but it pays to be polite. And, when it comes down to it, you really aren’t “above” others.

As a freelancer, it’ll be up to you to market yourself. Most likely, you’ll be creating a website for yourself.

When Google came out with their Panda & Penguin algorithm updates last year, a lot of Black Hat marketers felt the stinging sensation of Karma kicking them square in the rear. Those who bought links, engaged in spam marketing, or used other skeevy techniques to get their sites ranked were punished.

Focus on creating great content and you’ll get there. Just be patient. Good web practices are (eventually) rewarded.

3. Always do your best work. Always.

The dry cleaners in our town had a C.S. Lewis quote up on their sign board for a while… It went like this:

“Integrity is doing the right thing, even when no one is watching.”

To put that in freelance writer terms: Write your best, even when “no one” is reading.

Even when you’re getting paid too little.

Even when you’re not getting paid at all!

There is no excuse to not give a writing assignment your all. Every time.

Or, as Linda Formichelli put it:

“No matter how much you’re being paid, if you accept an assignment, your editor–rightly–expects your very best.

Your job is to only accept gigs where you know it will be worth your time to do your best work. So if taking on a low-paying assignment means you’re tempted to cut corners, then you shouldn’t do articles at that rate.”

Even if you end up writing for a smaller company or a “no name” blog, give it your all. As with Rule #1 on this list, you never know where that piece might get you. You never know who might end up reading what you’ve written.

Plus, you agreed to do something.